Forgotten Runes Wizard’s Cult (FRWC) is an NFT project where the data and code used to generate Wizards is stored on-chain directly in the Ethereum blockchain. This is different from a lot of other NFT projects where usually the NFT image is stored off-chain in some kind of external filestore (like IPFS). FRWC allows Wizard images to be generated 100% from code and data stored on-chain. Wizard NFT images are also stored in IPFS for conviniance (contract can be used to generate this URL) but are not required.

This guide is based on a script from project founder dotta. If you just want the script then feel free to jump ahead. I will try and explain how the script works and the context around it in this guide.

There is a specific assest published by FRWC called the ‘Decoding Crystal’. You can view it on OpenSea here. As the name implies this is our starting point for generating Wizards.

Under the ‘Details’ tab on OpenSea you will see the Contract Address field. Click on it and you can view the contract on Etherscan to see the details and source code for the contract.

The decoder code is stored inside the the second transaction on the contract (0x0b8eb29d7a592023b5330fd9a93299bca2a9604aaa2494c87333fc56da50ec9e). Open that transaction and expand the fields list until you can see the ‘Input Data’ field. This is the hex encoded transaction input data which contains the code we are looking for. Chage the ‘View Input As’ to ‘UTF-8’ in the Etherscan website, and the decoder source will magicaly appear. It’s TypeScript and does not run directly on-chain, but it is stored there.

If you’re following along with the script provided by dotta you’ll notice the first line is creating the same decoder.ts file. It’s doing the same as thing we did manually above in these steps:

You might need to install some dependencies (like jq) to run the script. Using either method you are basically converting the transaction input data and saving the result to a file.

Compiling and running the script

The decoder.ts script runs with node.js and requires some dependencies. Make sure node.js is already installed and path set correctly before trying this (I’m using node v14.17).

This should run without errors and you shound find your wizards created inside a ‘wizards’ sub directory. You can change the ids passed in the ‘wizards’ argument to any of the 10,000 wizards.

There are three main functions in the script which we will talk about. Each one performs a different step that is nessacary to generate a wizard image from on-chain data. You’ll need to follow along with the source code.

First let’s look at the ‘provenance’ variable. This object stores several ethereum transaction hashes that contain the base data. These transactions store:

The data for parts and traits is stored inside the transactions input data. Same method as how the decoder source was stored but just using different transactions. This data (and the source code) is all that’s needed to generate all 10k wizards.

This function uses the Ethers project to download the ‘provenance.img’ transaction. The transaction input data for this transaction contains a hex encoded PNG image on-chain, which is then extracted and saved to an image file locally. You can see the PNG header in the on-chain data if you switch the ‘View Input As’ to UTF-8 under Input Data on Etherscan.

The image file is then saved to ‘forgotten-runes-traits.png’ inside the ‘wizards’ directory. Open it up (after running the script) and you will see the building blocks of every wizard. In a later step these are composed together to generate each wizard.

Trait transactions hashes (from ‘provenance.traits’ array) are downloaded with Ethers and the input data decoded. The data is stored on-chain as hex encoded BSON (Binary Json) in the transaction input data. You can see in the code the input data is converted from hex to binary, and then deserialized from BSON to JSON using bson-js. This happens for each trait transaction (there’s ten of them) and the results of written to a ‘traits’ array which is used later for generating a specific wizard. A file ‘traits.txt’ is also written in wizards directory.

You can also find the transaction hashes on Etherscan, decode the hex input data (with xxd), and then deserialize from BSON to JSON if you want to do this manually.

Take a look at the ‘traits.txt’ file and you can see each of the 10k wizards has a list of integer properties. These properties define a wizard’s background, body, familiar, head, prop, and rune. The number of each property maps to a specific sprite in the parts image - which is how the complete wizard image is composed in the next step.

This is where trait and image part data are combined to generate a wizard image. Wizards are generated one at a time, and the trait data for that specific wizard is passed into the function. The image processing libary Sharp is used for image manipulation.

The wizard’s six traits are iterated over and processed separetly. The integer id of a trait is mapped to four boundies that define a box in the sprite map specific for that trait. The image data inside of this box is then extracted and stored in an buffer. This happens for all six traits until you have an array of buffers containing the image for each trait.

The trait id ‘7777’ is skipped - I assume this means that the trait is not defined (e.g. the wizard has no rune or prop).

Next the trait buffers are passed into a ‘composite’ function in Sharp that combines and layers them all on top of each other. Because the sprite map includes alpha transparency and each trait image is the same size, they are combined without any data loss. The result is the complete wizard image!

Wizard’s image is then written to it’s own PNG file, and meta data written to a CSV file.

You might notice there’s a transaction hash in the comment on the last line. Using the same methods as above you can download that transaction and decode the input data. I believe it contains affinity data for each trait id. 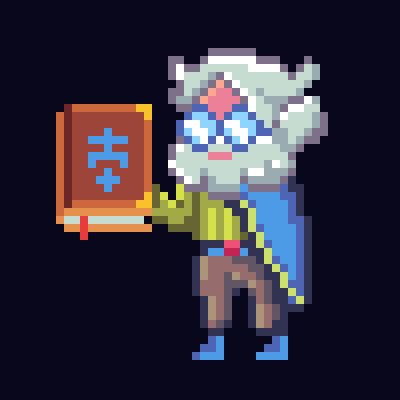